Yesterday: Portland to Denver, Day 1
Left: From our Hotel at 9:00am, and drove around downtown Salt Lake City until we got a glimpse of the LDS temple. We decided that we are more impressed by the majesty of the Lake Oswego temple, but it was pretty.

It’s 9:50 and we are killing time in Provo. With two less-than-happy-cats in the car and 8 hours of driving ahead of us, you may ask, “Why on earth are you stalling in Provo??” I’ll tell you why…

Matthew has a bit of an In-N-Out Burger addiction.

When we spotted an In-N-Out from the freeway last night, Matthew almost had a conniption fit, and I thought he might try to drive across the freeway median to get there, but we still had a ways to go to get to our hotel and I wanted to get settled before getting dinner. But how about In-N-Out for breakfast? Which turned out to be the best alternative to the Gluten Fest 2014 that was the “hot complementary breakfast” at our hotel. (A feast of pastry, bagel, waffles, biscuits and gravy and cold cereal. There wasn’t even fruit or yogurt. There was literally nothing Matthew could eat.)

But not to worry! Because we had In-N-Out in our pocket! Except it doesn’t open until 10:30…

Option 1: Drive on to Denver, getting breakfast somewhere else, forsaking our last opportunity for In-N-Out until the return drive.

Matthew pointed those big, begging, blue eyes at me, and Option 1 disappeared. I never regret eating In-N-Out. It is simply the best fast food, ever.

12 hours later, we have arrived in Denver and are fed, watered and settling in with our cats who seem not to trust that we are actually staying here. (This being their 4th home in as many days, I can’t say I blame them.) Our drive into Denver was stunning. 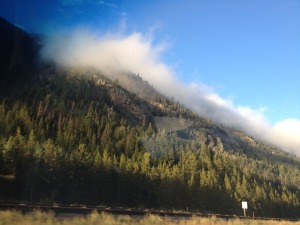 The gloriously ironic thing: one big reason Matthew and I picked Denver was for the sunshine. And our first approach into the city was grey, overcast and drizzling.

Earth sculpting, 300 million years in the making. #ArchesNationalPark was once a sea bed. pic.twitter.com/ghWOSYiVzQ

After nothing but beautiful partly cloudy sky, we hit drizzle and fog coming out of the mountains in the last hour b4 Denver. Figures. 🙂

“If it’s foggy like this in Denver, so help me I will turn this car around.” – @cathelizabridge #wecameforsun

Arrived at our new home. 🙂

Menu at the bar next door. “Fuck yeah” applies. pic.twitter.com/1UKMXGxUpw