On Monday, Matthew and I played hookie and went where? Yes! The zoo!

We’ve been looking forward to November 3rd since the week we arrived in Denver. I went online to find all of the “free days” Denver has to offer. In addition to the zoo, we’ve also been to the Denver Art Museum and we’re going to the Botanical Gardens this Saturday, all for free! (Though we did buy a much needed coffee that afternoon at the chaotic Kibongi Coffee Shop.)

Coffee in the afternoon? Are we crazy?

No. We were freezing. Monday was the coldest day we’ve experienced in Denver, hovering around 39 degrees. Im an “autumn optimist” (some would say “autumn idiot”) and it is my tendency to not bust out my winter ware until frost is on the ground. Somehow, I believe that if I don’t dress for the weather (thereby acknowledging it’s cold out there) I can hold onto the last remnants of summer. My big grey “apocalypse coat,” (a gift from my Mama) stayed home.

Denial is a powerful thing. Except it didn’t work Monday and is likely to kill me in the future.

But we were at the zoo! So it was worth it.

I find myself conflicted about animals in cages, but I have to say this about the Denver zoo: they care very deeply about conservation and animal sanity. Not only do they supply their animals with homes as close to their natural habitat as man can create, they are active participants in breeding and releasing programs to repopulate e 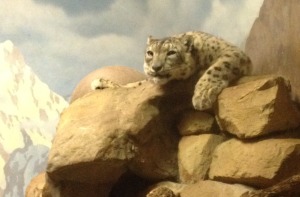 All that said, I would appreciate it if you could send some happy thoughts to Denver’s snow leopard. Of all the creatures I witnessed in captivity, this fellow seemed to have the hardest time coping. When we were outside, he prowled around the back of his cage, occasionally letting out this wail that would chill your bones. You know that sound that your cat makes when you put it in a carrier? That guttural, threatened sound? Imagine that from a 150 lb creature. Once he came inside, he lay down on the rocks, and I captured this image. Like I said, just send these beautiful creatures some happy thoughts.

My new favorite animal, however, was having much more fun. But at 4 months old, everything is fun. The Fossa (pronounced FOO-sah) resembles a cougar (it was in the Feline exhibit) but their closest relative is actually the mongoose. They have long bodies and a tail to match and at 20 pounds they are the largest mammals on Madagascar, putting them on top of the food chain. Here is little Rico and his mama Violet. Although still at nursing age, Rico doesn’t believe he should be excluded from the bone that’s larger than him. No way. 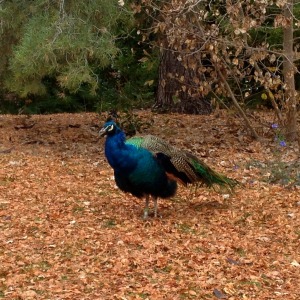 The last time I went to the zoo with my mother, she called out at the roaming peacock and got him to open up his plumage. (My mom’s got the pipes to seduce a peacock. I’m a proud daughter.) In her honor, I called out at all of the peacocks I saw, but they weren’t interested. 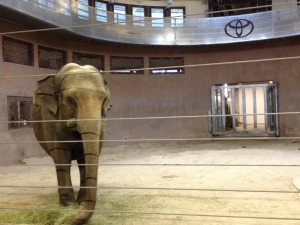 Last but not least, we have Denver zoo’s Toyota model. I hope she’s paid well and has an awesome dressing room.