This morning began when I rolled over and, bleary-eyed, mumbled to Matthew, “We should really post something on Galactic Panda today”. He blinked back, took in that first breath that stretches the rib cage, and pronounced, “… Sure!” 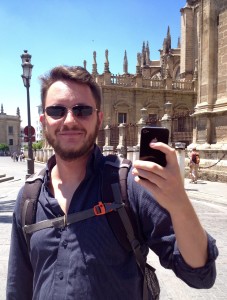 Matthew at the Cathedral of Seville

“What the heck are we going to write about?” I thought. We’ve spent our five days thus far in Sevilla playing catch-up at work, finding coffee and groceries, and begging our landlord to come over to fix the shower so it can be set to a temperature a little cooler than “nuclear volcano.” We haven’t seen much of the city.

Today was intended to change that. So we walked deep into the old city, in search of the cathedral.

And while there, today’s blog post wrote itself as I was lovingly pick-pocketed. Okay, metaphorically.

If you’re ever in Sevilla and some kindly looking woman tries to hand you a piece of Rosemary, you say “No, gracias!” repeatedly, and you move on. They won’t give you another moment’s attention when they see that you’re wise to their ways.

What ways are those, you ask? Well here’s what happened to me.

As the hot sun beats down and we wind through these paintings, toward us come a throng of smiling women, holding out sprigs of rosemary, offering it to the art appreciators and tourists. “A gift!” they say, “A blessing from Santa Maria!” Most of the tourists declined the blessing.

When I was offered, I thought, “I love rosemary!” So I accepted.

And the beautiful young lady pleasantly, but aggressively, launched into an elaborate telling of my fortune based first on my right palm, and then my left, in patient Spanish. It all happened so quickly, I was in the middle of it before I had a clue of what was happening. She told me I would have two children, that the strength and luck of my ancestors passes to me, that my lottery number is five. She repeated that a few times — she really wanted me to understand that. My lottery number — it is five. She said many other things that I did not understand.

She was lovely and charismatic and seemed to really care about her craft. And at the end, I thanked her and started to pass her a couple euros in thanks. “No,” she insisted. It was five euros for each hand, and she had done both. I was in shock. Ten euros?! But I passed them over, just wanting the whole awkward exchange to be over.

I learned later that Matthew had had a similar experience: the woman made her offering, and he accepted it, and she launched into telling his fortune. Immediately, he declined, at which point she asked for payment for the Rosemary. Amused, he handed the sprig back, and said “No thank you” many times.

He then tried to walk over to me, at which point she waved him off, declaring the reading sacred — he must not overhear. He felt genuinely affronted at that point, as this woman stood barring his way to his girl.

“Seems a little extreme,” he said to me later, only then realizing that it must have been a sales tactic. She did not want Matthew interrupting her sister’s sale.

All of this was capped off by my fortune teller acting horrified that I wouldn’t pay for Matthew to have a reading of his own. 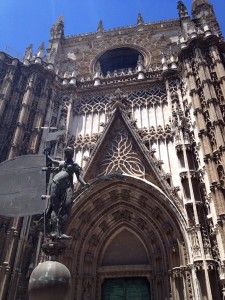 I was really hoping that this lovely lady with the weather vane was going to be the patron saint of ships. More photos and history later!

That “I’ve been taken advantage of” feeling washed over me. Even as we walked around the outside of the gorgeous cathedral, emotions flooded my gut: embarrassment that I had let it happen, and anger that people take advantage of others this way.

I let this happen. At no point did she handcuff me and forcefully take my cash. I was 100% complicit in this. But I never consciously consented to any of this. She manipulated and corned me with her aggressive and disarming sweetness.

I thought about what makes a good sale. At Rocket Lift, we talk about this a great deal. Our goal is to make every sale a win-win-win. The client feels like they’re getting an excellent service (which they are), Rocket Lift feels that the client is a good fit and that the work is worth the time, and the people doing the project are excited about the work. No one feels that they have been taken advantage of.

This young Gypsy had so much conviction in the value of her craft that I in turn felt that there was intrinsic value. That combined with sheer shock caused me to part with ten euros I really wish I hadn’t, and that I felt I got nothing for in exchange.

Our friends in Zihuatanejo, Jeff and Harmony, introduced us to “The Stupid Tourist Tax,” and we used that term for a while. All travelers have been in a situation where you pay too much for a taxi, buy groceries from the stores with the high tourist markup, pack too much and pay extra in baggage fees… These are the mistakes we make when we have just not learned better yet. Key word: yet.

Our friend Alba in Valencia has a different term for this: “Sacrificing to the Travel Gods.” We like this better because instead of something being taken from us, we can think of our parted funds as an due gift to benevolent and playful forces we dance with, who in return help us cope, function, eat, sleep, breathe, and perhaps even blend in a foreign place.

These sacrifices have inherent value, including wisdom, and stories we can share with you for entertainment.

All our knowledge has its origins in our perception. — Leonardo da Vinci

“Sacrificing to the Travel Gods” is 100% about perception. I can look at this experience as a negative one, wherein some horrible woman stole from me (I did feel that way for a good hour or so), or I can realize that now I know something I did not know before, and know it will make a funny story later.

Once you realize you’ve been had, if you find yourself incapable of distilling a lesson or finding a pearl of wisdom from your experience, then maybe the Travel Gods had little to do with it. Or, maybe it’s just that something really shitty happened to you.

My father was pick-pocketed in France. As I recall, they took his passport, and he left my teenaged brother on the bus with their bicycles to chase down the culprits on foot.

I don’t believe that any just and generous God encourages one human being to fill another with the mortal terror that comes from being separated from their passport. No sacrificing to Travel Gods here, just desperate people victimizing others.

Dad got his passport back; the lesson here being: keep your friends close, your passport closer, and chase down pick-pocketing enemies with the wings of Mercury. (I suppose maybe he’d banked a favor with the Roman God of Travel earlier, demonstrating another side of the inherent value in these sacrifices.)

A big yellow taxi took my Peso away

We can look at the local entrepreneurs as merely taking advantage. Sometimes, they certainly do. On the other hand, perception can give two sides to the same interaction.

When we arrived in Zihuatanejo, Jeff and Harmony instructed us to take the bus to the city center. It would cost about a dollar. We walked around the airport, looking for signs to the autobús and asking everyone how to find them. Alas, no signs, and no one seemed able to help.

A month and a half into our residence in Zihua, we knew we could get a bus to the airport, no problem. Busses with “Aeropuerto” stenciled all over them were everywhere in the Centro. Unlike taxis, these were filled with locals — not with gringos.

We suspect that the airport employees are in cahoots with the taxi companies, and aren’t about to help clever tourists take the cheap bus when they’re ripe prey for the taxi drivers.

No problem, we thought. We paid the Travel Gods — now we know better. We’ll take the bus on our way out.

Except, the day of our departure was the day that I got hit with the worst food poisoning I’d ever had. A few years ago, I would get food poisoning about once a month so I was no stranger to this, but this was something special. I spent the entire night praying to keep water down, and trying not to get dehydrated. Matthew had to pack and clean the apartment for us, all by himself.

Even though we had plenty of time to get to the airport, the thought of squeezing next to 20 other people into a tiny van (the buses are more like vans), without AC, with an unpredictable stomach… there was simply no way.

Matthew, my hero until the end of time, got me to the airport via a nice cool tax cab. Another $45, and the best we’d ever spent.

Knowing and choosing your options makes all the difference. It felt fine to pay the $45 this time, because we had agency. This was a win-win! We were happy to pay almost any price for a cool drive, and the driver was happy to take an expensive fare to the airport. Even if he was over charging the rich gringos, meh! We really didn’t care.

Pass the love and wisdom on!

Do you have any memories from traveling abroad when you wish you could’ve had a do-over? When did you spend too much? Dad, did I get that pick-pocketing story right?